The fun of designing hand knits

I hope this post isn't too long, but it is my knitting history, for anybody that is interested.

Let's start with my knitting background.  I learned to knit around 1967.  But I did so many other crafts through the years I would only knit on occasion.  I would knit a blanket and then not knit for a couple of years.  Over time I forgot what I learned in those original lessons.  I just knitted basic blankets, but I did have a Debbie Bliss learn to knit book, and I would pick out a knit and purl design for the blankets.  So I guess all along I wanted to design a little. That book had a section on Entrelac and I would flip right past it thinking there was no way I could ever do that.  In 2009 I took several basic classes and became obsessive in my knitting.  When I figured out I really could read a pattern and follow it on my own I went back to that Entrelac section in the book.  You have to remember this book isn't really a pattern book, but a book of a library of stitches.  I had do "something" with that Entrelac I was half afraid of.  So I decided it would be a felted Entrelac purse.  My first attempt was a joke.  I didn't knit in the round and I did the wrong number on each tier, so when I sewed it together it didn't come together correctly.  Add to that with felted most real "boo-boo's" are not known until the felting process is completed.  I had several failed attempts.  Hence the beginning of actually writing what I was doing as I went so when it failed I knew to trash that design, but more so when it worked I kept it.  I was totally fascinated by Entrelac, and the 3 or 4 Color Entrelac Felted Purse was my first purse design to release.  I now have 4 different felted purse designs being sold. 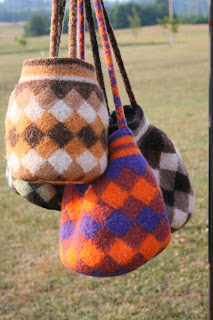 Although the Entrelac purse was the first purse design I released it was actually my 5th design to release.  My first and third were both lace fingerless gloves with asymmetrical thumbs.  Then I was asked to design a cowl, then somebody else took that a step further and asked that I design a cowl with a Moebius cast on.  I didn't even know how to do this myself.  So I took the link and sat in front of the computer and figured out the cast on.  Then I designed a cowl with the same lace I used in one of my glove patterns.  The glove and moebius cowl can be purchased as individual patterns, or an ebook, Heirloom Goods Eyelet Moebius and Fingerless Gloves. 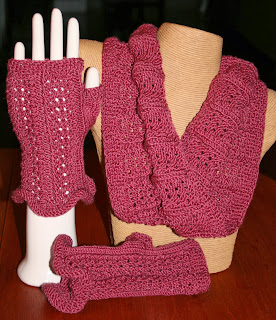 My first granddaughter was born in 2010 and naturally I started knitting for her.  It seemed like all the little dresses were knit flat and then sewn together.  When something can be knit with circular needles and eliminate the sewing together step I just don't understand why a person would design a pattern that way.  Plus a little girl needs some special designs just for her.  She got several, and one became my 2nd design to release, naturally as Audrey's Sundress.  Her bear also received a matching dress, it is truly a One Of A Kind, because I didn't keep the info as I knit it.  Audrey was able to wear her sundress for close to two years.  It started as a dress below her knees and she was able to wear it until it was a top with jeans. 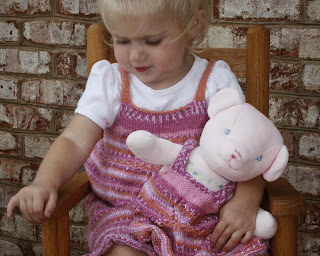 I guess I design in a different way than most people.  Most designers for hand knits have some type of design software.  I don't have any software, I use Word and Excel.  If I purchased software I am not sure I would know what to do with it.  So I continue to design the same way.  Naturally I have to have some knowledge of what I am wanting to design, as with the fingergess gloves.  The first fingerless mitts I knit were symmetrical, then I took a class on something else entirely, but in the class I learned asymmetrical thumbs, and I was hooked.  For me it was just natural to design with lace.  So I went to reference books and excel and worked up a lace design for the gloves.  The first lace gloves I released were Drooping Dayflower Fingerless Gloves, being modeled here by my dear friend Loretta Ball. 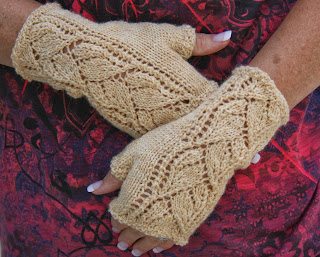 Then along came my first real lace shawl.  It was a Faroese style shawl and again I was hooked.  Love the way the shoulder shaping of the Faroese shawls make the shawl stay on your body without shawl pins or tugging all the time.  When it came to designing a Faroese shawl I changed the shoulder shaping 4 times before I got it to what I wanted it to be.  It was a very slow process because as I was knitting the first one I was diagnosed with stage 3A breast cancer.  My treatment began with chemotherapy instead of surgery due to the aggressiveness of the cancer.  I completed the 4th shawl, with numerous changes in each knit of the shawl, about the same time my chemotherapy was completed.  I handed that 4th design to test knitters right before my surgery and released the Scottsdale Faroese Shawl in May 2013.  November 2013 the sales for the Scottsdale passed sales of my other patterns to become my number one pattern. 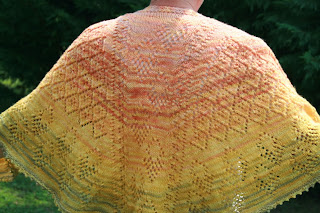 Right after the release of the Scottsdale Faroese Shawl I began radiation treatments for my cancer.  While taking the radiation treatments I designed another shawl, but this design was totally different for the Faroese style.  I knit this as I designed, not even sure what I was going to come up with.  I actually finished the design during the 6 weeks of daily radiation treatments, so naturally I named it Celebration, because I was celebrating not having to go for those daily treatments any more.  This design wraps around and I feel more dressed up when I wear it.  This shawl can be knit in two sizes, which is determined by which needle size you knit with.  The photo is the larger design.  I have also knit this one 4 times, but I made no changes from the original design.  This shawl has 201 beads added as you knit, if you don't want the beads you can knit it without using the beads. 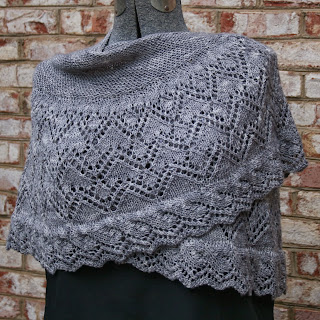 I currently have my 3rd shawl design with test knitters.  It is named Joann Elizabeth Faroese Shawl, named for my mother.  I also added beads to this design, but can be knit without the beads.  It is being modeled by Karen Keene in the studio below the Smoky Mountain Spinnery in Gatlinburg, Tennessee.  Be sure to click on this photo to enlarge so you can see the lace design. 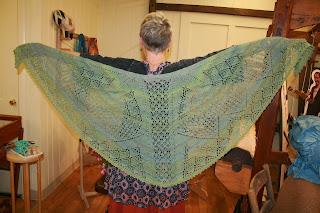 I do have to say more time than I want is spent in front of the computer while designing, but it also has me knitting a lot of the time too.  I truly enjoy designing, and enjoy working with my test knitters as they are the first to knit my new designs.  They have encouraged me along the way and I know they have helped me toward the success I have had with my patterns.  I currently have 12 patterns for purchase in my Ravelry store or at several local yarn stores.  These 12 designs have sold over a total of 580 patterns.

Happy Knitting to all!!!