These gloves each have two hearts knit with a very simple eyelet.
The tops of the hearts are toward each other,
so no matter which way you look at the glove you
see a heart. 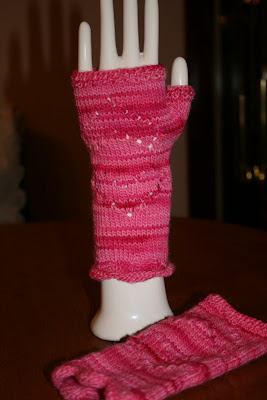 Me just playing because I got the pattern in my head and it
wouldn't go away, so I knit them.
Now maybe I can move onto something else.

I have finished the purse in the previous post,
but I don't have the strap on it.
I am still trying to decide if I am going to line the purse or not.

The first gloves are knit with 'Alpaca Sox',
I love the feel of this yarn, and the color.
This pair is the first lace pattern I ever designed,
but not the first pair I knit by the pattern. 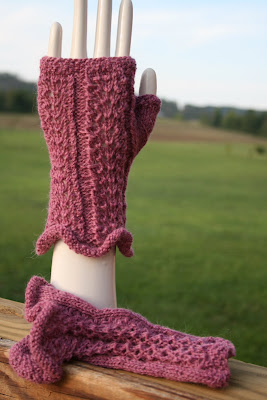 The black pair is knit by the same pattern
but I shortened it at the knuckles.
Still gave it the same finished edge thumb. 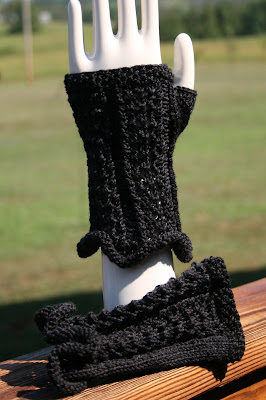 The last photo is also my own design,
but I probably won't sell this pattern.
I consider the actual pattern a work in progress,
although the gloves did turn out fine.
I named this pattern "Exa Elizabeth" after
my Granny Sorrells. This pair of gloves
is knit with Berrocco's Alpaca Ultra Fine.
Which is the same yarn I used for my first
Moebius Cowl pattern (several post below). 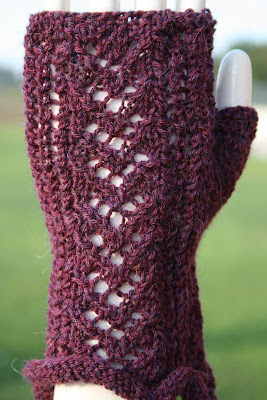 Posted by Leedra at 8:00 AM No comments: 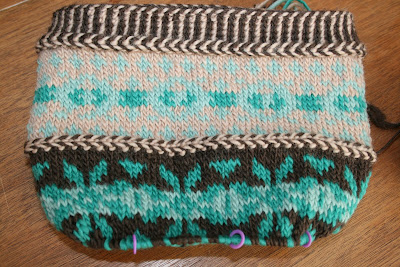 Just a quick update on my fairisle purse.
This is knit from the top down, so what you are seeing
is the top half of the purse.

Beginning of my next design 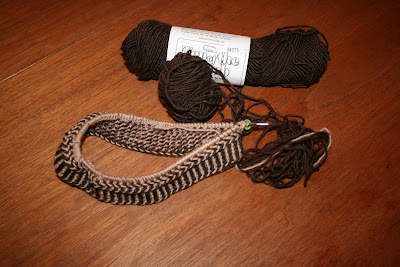 This is what I am currently working on.
A new design, rolling around in my head,
I started it Tuesday morning, but I have torn
it out once already. That is just part of designing.

It does begin with a 2 color cast on which I really like.
After 6 rounds then it has a herringbone braid,
which you see here close to the needles. 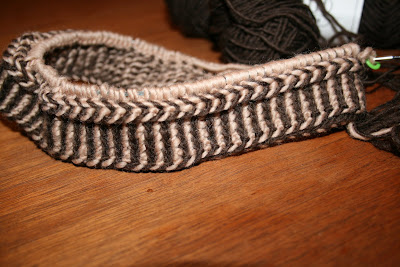 My latest design, a shawl.
This shawl is knit with 2 very different strands of yarn.
One a very thin acrylic, and one a mohair blend. 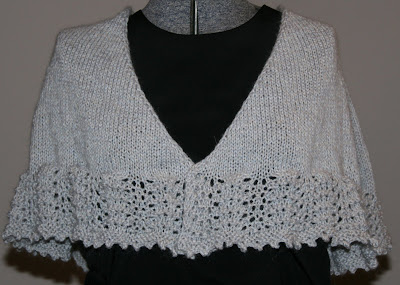 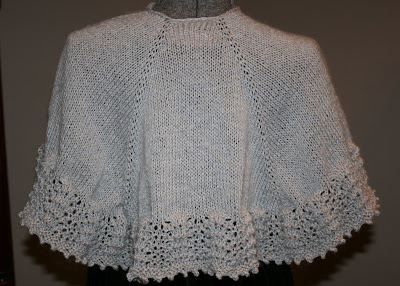 This design has a fairly fast increase,
with 10 stitch increase every right side row. 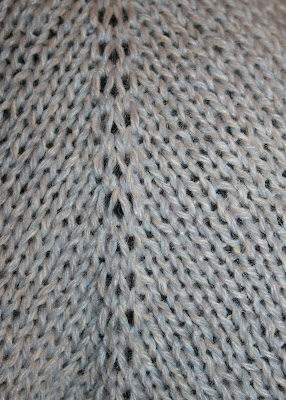 And ends with a lace border, and picot bind off. 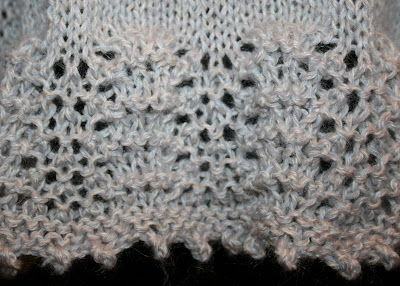 Posted by Leedra at 6:26 PM No comments:

A couple weeks ago on Monday I visited one of the shops that is selling my glove patterns and the owner requested I design a cowl pattern to match one of them. On Tuesday I went to another shop that is also selling my glove patterns. When I told that shop owner about the first one wanting a cowl pattern, this one said make it a moebius cowl. Well, I had never tried the moebius cast on but Sandy assured me with this video I could master it. I was then in Rockwood with no internet service, so I went to McDonald's with computer (on the way to yet another yarn store, that carries my patterns) and needles in hand and sat and watched the video. 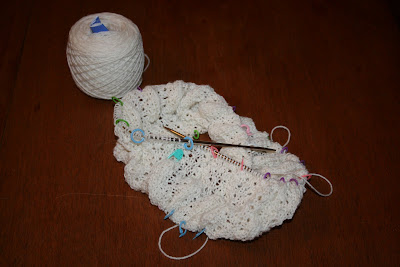 I took the lace portion of my "Ruffled Cuff Eyelet Fingerless Gloves" pattern and I designed and charted and wrote the pattern for it to be a moebius cowl. The glove shown is the sample I knitted for the Smoky Mountain Spinnery in Gatlinburg, Tennessee. It was knit using Alpaca Sox by Classic Elite Yarn. 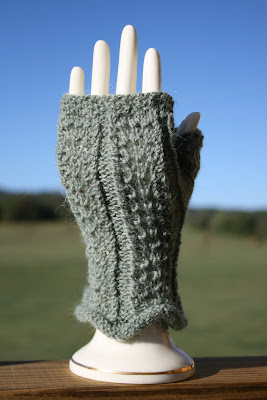 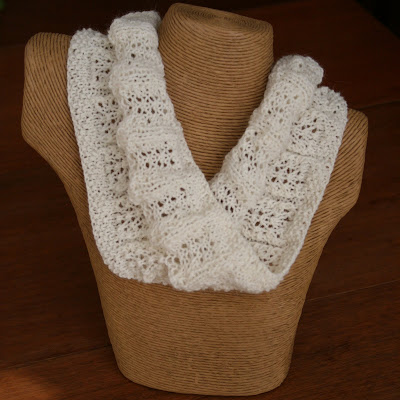 I finished knitting late Friday evening, really did not know what I thought of the puffiness of it, but I posted the above photograph to Facebook, stating that I had designed and knit it that week. Within half hour it had been bought, paid for (through Paypal) and packaged up to mail. 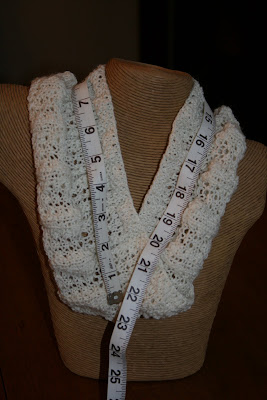 So I decided to knit another one. I learned something else knitting the second one. I knitted this one with Cascade Heritage ( 75% Merino/ 25% Nylon). Look at the difference in the length of the one knit using the Merino instead of the Alpaca. The Merino measures 28 inches. I had added 9 stitches to the moebius cast on, which really adds 18 stitches) but I was knitting with #5 needles, so it should not have added 6 inches to the length. I learned the Merino is just too relaxed for this pattern. I am going to knit another one with the Alpaca yarn (maybe even another brand) with the added stitches and see what happens. 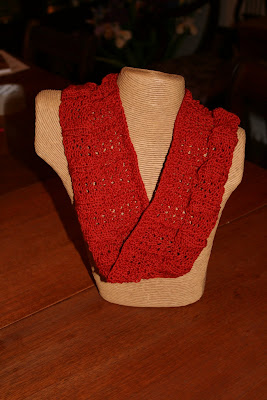 Oh, and the one that bought the white one is one of my first blogging buddies. Jen, from Unglazed. She doesn't blog much anymore, but she has friended me on FB. I actually think she was the very first blogger to purchase my photographs, several years ago.

It was a beautiful September day, as I passed by the
Appalachian Museum I decided to stop and photograph the sheep. 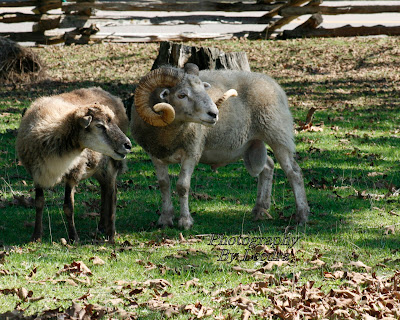 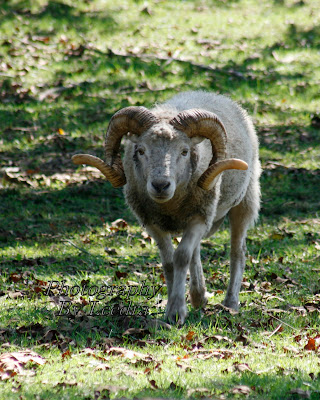 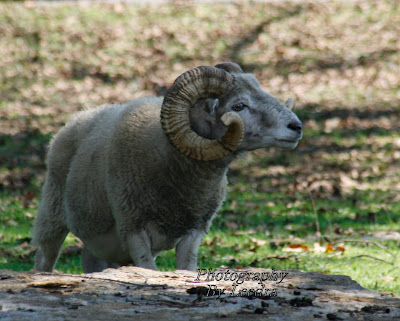 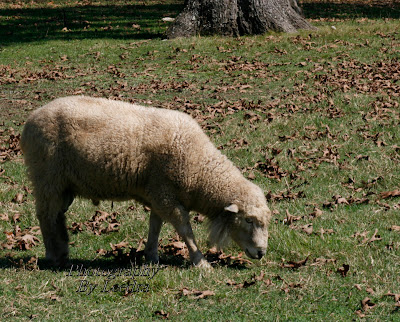 I wish I knew sheep breeds but I don't.
If anybody does I would like to know.
I went to their website but did not find
anything stating what breeds they have there.

I designed this mesenger style purse and knit it.
After knitting, the purse is then felted. 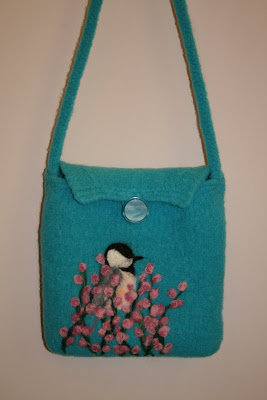 After felting the purse I then needle felted
the bird and flowers on the purse. 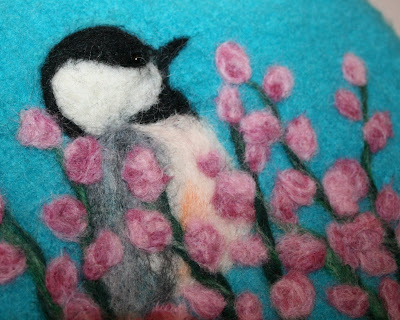 I entered this purse in the Jefferson County Fair
this past summer and received first place in the felted category. 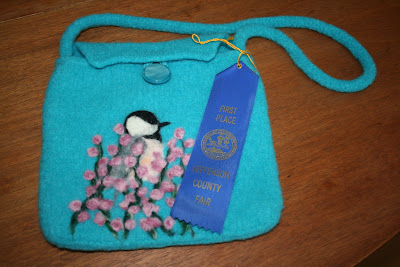 This purse sold at Heaven & Earth Gallery
on the craft loop in Gatlinburg, Tennessee.

All the post before this post were exported from Leedra's Photos For Fun. They are related to what this blog is about. All future post will only be on this blog.
Posted by Leedra at 2:23 PM No comments: